I had heard so many great things about this event i simply had to enter, so last year as soon as entries went live, i booked myself a place on this epic event. Having never been to Wales before in my entire life i had no idea what to expect. So far in 2018 my year has been plagued by injuries, fracturing my shin and then a 3 month back issue meant I’d pulled out of various target races. But with that behind me i had started to get a solid block of training under my belt and i had even managed to win the inaugural South Downs 10k as part of my training build up. I also ran the Endurancelife Classic Quarter with my dad as his first ever ultra, he even ended up winning his MV50 category in the process. But now was to be the biggest test of all, i had never climbed a mountain…let alone attempt to run up one! So it was going to be a voyage of discovery!

The race starts and finishes in Llanberis in the heart of the Snowdonia National Park, so i booked a campsite for the saturday night before the race, in Llanberis itself. So after a 6 hour drive down on the saturday (i was very fortunate my parents drove me down) we arrived at the campsite. None of my family have ever been to Wales before and the instant we crossed over into Wales the landscape suddenly became absolutely breathtaking with all the endless peaks and valleys seemingly untouched towering high above the windy country lanes. So as my parents started the arduous task of assembling the tent, baring in mind it was now 5pm, i took the dogs for a walk down to the race expo and of course to review the the local cuisine options! So after a heading back to the campsite, the tent was assembled and we headed down to the village for some dinner! Now as this was a pretty unique set of circumstances normally i would not have opted for fish and chips from the chip shop as my ideal pre race meal, but i suppose it’s carb loading…right? So we sat down in front of the Llanberis lake (Llyn Padarn) and tucked in, you couldn’t get a better view and the chips were delicious too! So it was back to the tent for an early night. 2018 was the first year of the 36 mile ultra which started at 6:30am, as the race route went right past our campsite we were able to cheer them through. The marathon didn’t start until 9am so it was time for a quick breakfast, as supplies were limited it was some weetabix with 2 rather squashed bananas. Then time to double check my kit and then head down to the start. As we headed down to the start line i kept sipping on a sports drink and had a couple of dates to keep the energy topped up. So after a quick warm up to recce a bit of the route and listen to the safety briefing, lining up at the start i could see there was going to be some very stiff competition.

Everyone took up there positions, the countdown started and the claxon sounded…we were off. Immediately Adam Holland (a rather incredible and accomplished marathon runner!) tore off at a rapid pace and i settled in with a few of the others in a chasing pack, that included last years winner Callum Rowlinson and Jacek Cieluszecki (a massively accomplished trail and road runner with some ridiculous times and results to his name). After passing the campsite you start to climb up hill within the first mile and we started to reel in Adam and pass him. For the next 3 miles the leading trio all stayed pretty much together, i was trying to take in as much of the jaw dropping scenery as i could, all i wanted to do was stop and take photos of all the lakes, peaks and sheep! The three of us had settled into a rhythm, we successfully navigated the notorious welsh style, but next thing we knew Adam had caught us out of nowhere, he then proceeded to blitz past us and off into the distance. The three of us looked at each other in shock, do we follow or let him go? We seemed to conclude that pace was too fast for us! Over the next 3-4 miles Jacek had edged slightly in front with Callum close behind followed a bit further back by me. The route was slightly undulating but no significant climbs, the support was fantastic even in the most remote parts people were cheering everyone on. The terrain was extremely changeable as one minute we were running through marshland, then mountain paths followed by woodlands each stunning in their own ways.

Over the next couple of miles the positions changed slightly, Jacek had fallen slightly behind and i found myself running with Callum, Adam was still putting serious distance between us as we couldn’t even catch a glimpse of him! Callum and i found ourselves running together for pretty much the next 8 miles and the course along this section remains relatively flat with a few minor undulations, we chatted about all manner of things but he told me he had ran this race every year since its opening and just looking around i could clearly see why. Based on his massive experience it seemed only sensible to try and hang on to run with him. It was mainly gravel paths, gates and my almighty nemesis ‘the dreaded cattle grids’ to negotiate. I wasn’t really feeling the need for food but i forced down a couple dates to try and avoid the dreaded bonk later on. As we were running on the gravel path we were surrounded in every direction by mountains, me not being a local, i spent most of this time trying to work out which one was Snowdon, but to no avail. Callum then pointed out the fact we can’t even see Snowdon yet…these mountains all seem huge…what an earth was i in for? All the aid stations we had been through offered great support and water seemed hugely plentiful. My plan was to drink the water in the cups offered at the aid stations to try to reserve my own water for the more remote parts where i would be more desperate for it.

So looking at the course profile before the event i knew that things were going to get tough at mile 18 when we start to climb snowdon and Callum had reiterated to me there was a “nasty sting in the tail” So Mile 18 comes and we are starting to climb the Pyg track, i had been looking forward in a strange sadistic way to see how i would fare climbing a mountain! Early signs weren’t good i was feeling pretty wasted so i eased up to take in an isotonic gel, that seemed to almost immediately perk me up. So for the next mile i was feeling good, before Callum pointed out that the leader was insight, this gave me that little extra incentive to push. Then looking back i could see Jacek had began to massively catch us up. Callum seemed to be slowing, so i offered him some gels or water but he said he was going through a bad patch and i should go on. So now i started to reel in Adam as the gradient started to increase, as we reached a gate he very sportingly allowed me to go past and in his own words “i don’t do hills”, i thought to myself he has really stitched himself up today then? Much to my disbelief i was now leading, so for the next 3 miles it was eyes glued to the trail, the Pyg track seemed to switch from shale to boulders to stone steps. So at the Pen Y Pass checkpoint the top 3 were covered by 30 seconds. As i climbed further up the mountain the wind seemed to pick up and the cloud cover seemed to thicken, so i couldn’t actually even see the summit! I had kept sipping water as the pace was slower and i was starting to feel a bit thirsty.Various hikers offered support and cheers. Approaching mile 21 i was feeling pretty wasted, so i resorted to my fall back fuel, FRUIT CAKE! I knew the toughest part was to come, so cake always seems to make everything better! The next mile was the most brutal mile i have even undertaken, the path became very steep, in some parts clambering on my hands and knees to climb up. As we were in the cloud cover visibility became rather challenging, this coupled with me getting quite lightheaded, a combination of dehydration and possibly the altitude. The hurt locker had firmly been entered! Nearing the top a couple of hikers informed me i was nearly there only about 1 hour to go…i really hope they are joking! After a few hundred metres more i had reached the summit, much to my surprise i was still leading, could i hang on? It was GAME TIME!


So throwing caution to the wind i bombed the next mile, helped massively by the steep descent, a few moments too fast as my legs were going uncontrollably fast. I blitzed past the various half marathon runners who had climbed Snowdonia from a different path but we all joined and descended down the miners path. I grabbed a quick cup of water at the mile 23 checkpoint and it was back to business. Now as my legs were really beginning to feel the fatigue i wasn’t picking them up enough along with some cramp in my calves, this caused me to bite the dust pretty hard at miles 24 and 25 straight onto the shale path, each time i dusted myself and got back to running as quick as i could, no time for taking in the view or the pain! As i approached mile 26 the route stops descending and becomes very flat. In hindsight i had been looking forward to this flatter section to save the quad battering, however my legs didn’t adjust particularly well and it was an almighty struggle to get any rhythm going! Following the road the race then split again into separate half marathon/10k and marathon/ultra routes. I gathered whatever i had left for one last push, i navigated the car park, the bridge and was now on the field that led to the finish, i took one last glance back to double check i wasn’t being caught…no one! Now the euphoria began to kick in as i rounded the final bend, i could see my parents with the dogs and crossed the finish line in 3 hours 37 minutes! I was informed this was a new course record by 14 minutes, much to my disbelief! It was at this point i looked down to see my bloodied knees, hands and body but i couldn’t have cared less, I had done it and even managed not to get lost in the process! 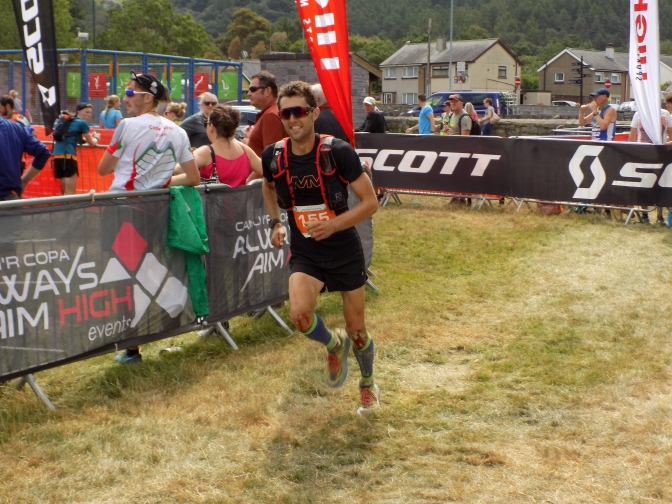 Best not to sit down i thought otherwise i would struggle to get up again! Jacek crossed the line less than 5 minutes in 3 hours 42 minutes after me to take second and Adam came through in third in 3 hours 58 minutes! So it was straight onto refueling with some quality nutrition…which of course consisted of chocolate milkshake and some more fish and chips! This was a truly epic event and experience i cannot recommend it to any runner enough, it simply has to be on your bucket list! I hope to be back next year to run the ultra with my dad to show him what an awesome experience it is!

General running nutcase, any inquiries please don't hesitate to contact me! View all posts by allhailthetrails